Each of us has its own city placed in a subjective map
impressions that decide how we perceive it
and we use it. But if there are more similar opinions,
the individual image acquires objective features. So what are ours?
cities and how do we care about them? Where we go and where
do we prefer to avoid? Online project «Shooting maps»
probes what the Slovak city environment is. 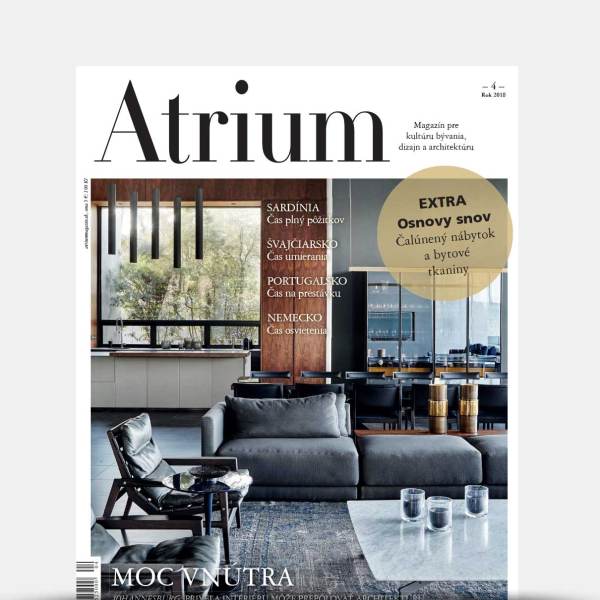 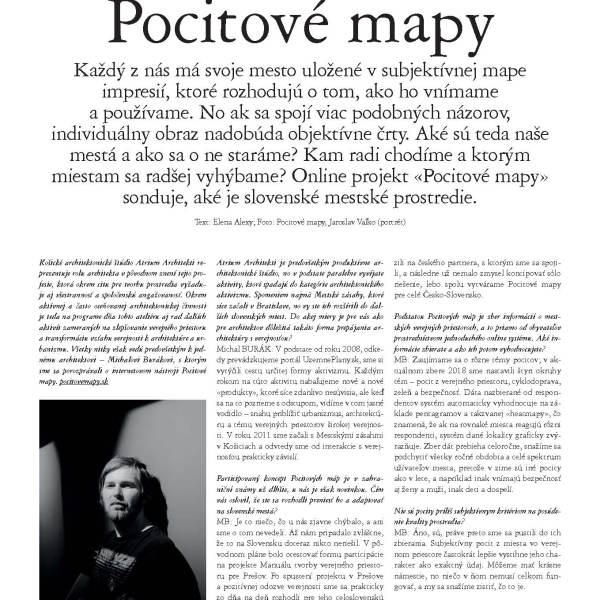 Košice architectonic stúdio Atrium Architekti show
the role of architect in the original wording of this profession,
which, in addition to the feeling of creating the environment, requires it
and versatility and social engagement. Except for
active and often appreciated architectural activity
there is also a number of others on the program of this studio
activities aimed at improving the public space
and the transformation of the public's relationship to architecture and urbanism.
All the threads, however, lead in particular to one
the architect – Michal Burák, with whom
we talked about the Internet tool „Feelings“
maps www.pocitovemapy.sk

Atrium Architects is primarily productive architectural
studio, but you are basically developing in parallel
activities that fall under the architectural category
activism. I will particularly mention Urban Interventions, which
though they started in Bratislava, but you have spread them to others
Slovak cities. To what extent is it for you?
for architects, this is an important form of architecture interconnection
with the public?
Michal BURÁK: Basically since 2008, since
we run the UzemnePlany.sk portal, we have
have set the path of some form of activism. each
we are packing new and new for this activity
‚Products‘ which are not apparently related, but when
we look at it with a distance, we see it clear
guide – an effort to get closer to urbanism, architecture
and the theme of public spaces to the general public.
In 2011, we started with city hits
in Košice and since then we have been virtually dependent on interacting with the public.

The participated concept of Pocit Map is already known abroad for a long time,
it is a novelty for us. What he said to you that you decided
transfer it and adapt it to Slovak cities?
MB: It's something that was obviously lacking in us, and not even
we did not know about it. When it seemed strange to us,
that no one has ever solved it in Slovakia. In the original
the plan was to test the form of participation
on the Project of the Public Spaces Manuscript Project
for Prešov. After running the project in Prešov
and a positive response to the public we have practically
from day to day they decided for his all-Slovak
application. From a technical point of view, we are at first
thinking about creating maps in their own direction.
We searched for inspiration abroad when we came across
to the Czech partner with whom we joined,
and there was no point in designing a solo
solution, because together we create the Map Impressions
for the entire Czech-Slovak Republic.
The essence of the Pocit Map is collecting information about the city
public spaces, directly from the people
through a simple online system. What information
and how do you evaluate them then?
MB: We are interested in different themes of feelings; in current
we pick up four sets of 2018s
themes – a feeling of public space, cyclotourism,
greenery and security. Data collected from respondents
the system automatically evaluates based on
pentagram and the so-called „heatmap“, which
means that if they react differently in the same places
respondents, graphically highlights the system.

Data collection is running year-round, we try
capture all seasons and the whole spectrum
city ​​users because there are other feelings in winter
like in the summer, and for example perceive security altogether
even women and men, otherwise children and adults.
The feelings are not a very subjective criterion for judgment
environmental quality?
MB: Yes, they are, that's why we started to do it
collection. Subjective feeling from a public place
the space often better reflects its character
as an exact indication. We can be beautiful
square, but something in it may not work quite well,
and we are trying to find out what it is.

The eight questions asked by the online system are addressed
especially pedestrians and cyclists, but a chauffeur who is also
a fully-fledged part of the process, and the city perceives differently,
there is a great deal of room for expressing transport.
Is that the intent?
MB: The car and the chauffeur are part of it
the city, but their interior is the user's space
cars and way. As soon as the chauffeur comes out of his own
cars, we are also interested in his feelings.
From our point of view, a good city should serve
primarily pedestrians and cyclists.

Your project has decent media support, but realistic
response to respondents? How many "feelings
»Must be collected so that it can be said relevant
a public voice?
MB: So far we have collected 40-thousand feelings.
How much we need them overall, we do not know. if
I put my feelings in the map, I do not see feelings
other respondents. But as long as my feelings are
they encounter the same feeling in the given place
someone else becomes less subjective
subjective. And if there is a third,
we can confuse subjectivism peacefully
for the relevant data over which it would self-manage
she should think.

Your ambition is to link people's opinions
with the competent authorities of city management and development.
How community politicians and other institutions can get to
the result of this survey?
And is that a matter of interest?
MB: Results are always available to everyone -
we are an open platform. There are cities that challenge this
understand and work with it for the benefit of the city user.
But there are also cities that I do not understand
to work with, do not know bjectivism is a peaceful exchange of relevant information over which to govern self-government.

Your ambition is to link the views of the population with the competent authorities of city management and management.
How can community politicians and other institutions be able to get the results of this survey? And is it about interest?
MB: The results are always available to everyone – our open platform.
There are cities that have been supportive and working with her for the
benefit of the city's user. But there are cities I do not understand, I do not know how to work, they do not know why they could serve them.
On the other hand, it is a pilot project in Slovakia – it should be time.